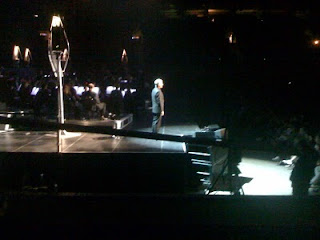 Posted by Robin Shantz at 12:44 PM No comments:

Today, I was offered tickets at the office to a big environmental
rally my employer is backing.

But my wife called up and said she'd been given free tickets to
tonight's sold-out Star Wars in Concert performance (narrated in
person by Anthony Daniels and including movie props & costumes on
display) at GM Place. And these are good seats. Very, very good seats
- row 7: closer to the orchestra than Han was to Greedo when Han shot
first.

Now, I'm all for recycling, taking the stairs instead of the elevator,
and taking care of the plants around the house, but this enviro
presentation/discussion/show isn't really my scene. It seems to me
like this sermon is going to be preaching to the converted - plenty of
folks who take sustainability more intensely than I do.

Now, the Star Wars musical performance on the other hand... Tickets
that were a gift to us from a friend to watch a really well put-
together show and listen to a great set of often moving scores to some
of my favourite movies (and how often do you get to see Daniels'
antics in front of you on stage?). Being among thousands of fellow
fans (some sporting costumes) from all walks of life enjoying
themselves. Spending a nice evening with my wife.

Save the Earth if you want to, but tonight, I'll look to the stars.

If that's wrong, if that's the Dark Side, then call me...
Darth Tubby!
('cause I can't think of a cool Sith handle)

Best wishes to Jill over at White Dwarf Books who's going in for hip surgery today. I'll miss chatting with her when I go in for my usual book fix. Hopefully she'll be back on her feet before too long.
Posted by Robin Shantz at 4:40 PM No comments:

There Goes My Wannabe Career as a Superhero

I'm ashamed to say I took the "Are you a hero - or just a henchman?" quiz on the LA Times site today (courtesy of a link on SF Signal) and washed out. Only scoring 50% on this geek trivia challenge, I was ranked as a "Mere Mortal".

That hurts. That really hurts.

I mean, I never had any allusions... I always knew I'd never stack up to the likes of Superman or Ghost Rider, but I thought that among the ranks of the metahumans I'd at least score something around the level of Captain Chaos (because Captain Chaos is awesome in his own right).

But "Mere Mortal"? There's no rising above that. You can study the superhero instructional guide that the Muppets got their hands on all you want, but you're never gonna cut it. Hell, as a mere mortal, you won't even get admittance to the bottom of the class at Hero High, and that's definitely a low water mark. As a "mere" mortal, you probably don't have much of a chance of a career as a non-powered masked vigilante like Batman - all the cool gadgets in the world won't help you rise above the depths of your mereness.

I guess that leaves me with just one option: villainy. The door's wide open there for mere mortals. I could take a stab at that. I have the office chair, I have a cat to stroke contemplatively, and I have a diabolical plan - well, okay, I don't have a diabolical plan yet, but I'm pretty sure I can come up with something. I'll just have to watch a few hours of Pinky and the Brain reruns for inspiration.

Pinky, are you pondering what I'm pondering?

Posted by Robin Shantz at 5:09 PM No comments:

How to be a Muppet Super Hero

For some reason today I've had a hankering to watch some of my favourite old Muppet Show sketches, and while poking around on YouTube I stumbled on one that was always near the top of my list: the episode where Fozzy, Scooter and the gang get their hands on an instructional book for would-be superheroes.

Over the course of the show, various costume-clad Muppets try everything from swinging on ropes to seeing through doors to jumping off ladders in the belief that they can fly. Just hilarious when I was a kid and still pretty funny now.

The "mastering abilities" sequences in Spiderman and Iron Man owe a lot to this episode of the Muppets.

The clip I've linked to above is a montage put together for a "remember when" sequence in a later episode, but the original scenes were from Linda Carter's turn hosting the show, I think. (which is another reason to seek out the original episode, 'cause hey, who doesn't like looking at Linda Carter?)

Posted by Robin Shantz at 5:02 PM No comments: