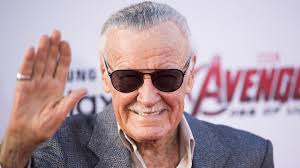 My first memory of comics god Stan Lee was his narration of the 1982 Saturday morning cartoon The Incredible Hulk. Sure, I'd seen his creations before, in the form of reruns of the 1960s cartoon Spider-Man, and during the original run of the late 1970s live-action TV show The Incredible Hulk, but the 80s 'Hulk cartoon (along with Spider-Man and His Amazing Friends — later combined into The Spider-Man and His Amazing Friends and the Incredible Hulk Adventure Hour) was the first time I'd heard Lee's name and voice, and his intense voiceovers permanently cemented him to the those iconic comic characters in my memory. My appreciation for the actual comic books that had given rise to these characters (as well as the character of Stan, in the fan and larger public perception) would come years later.

When I read the news about Stan's death earlier today, I have to admit, it didn't come as much of a shock. He was 95, and, from the news and internet coverage over the years, it seemed as though he'd been in decline since his wife's death. Time passes, as do our heroes.

And Stan certainly was a hero to many. One of the creative forces behind so many of the superheroes and superhero teams that have been a part of our nerdy lives and fan culture conversation (along with Jack Kirby, Steve Ditko and others), a pop culture figure who interacted with fans at conventions and other venues, and, in a larger sense on the pop culture stage, a reassuring voice that told us it's okay to like this stuff, and that our comic book characters and the stories they tell have real, meaningful value, beyond a few minutes or hours of entertainment. That value was especially evident in Marvel Comics' presentation of normal, later diverse, characters with identifiable lives (beyond — sometimes influenced by, and sometimes influencing — their superheroic adventures) and problems that we, as readers, can understand and have experienced. Peter Parker has to try to hold down a job outside of his costumed vigilanteism because, you know, food and shelter; and he worries about how to attract the girl he likes. The X-Men deal with discrimination, infighting, self-doubt, depression, and strained romantic relationships. Bruce Banner, in struggling to deal with the Hulk within, has to grapple with stress and emotional control, isolation, and the consequences of being persecuted and living without a home. Even the gods (and god-like alien entities) have problems in Marvel's universe. Thor has family issues, and, over the years, has made more than a few bad decisions. Galactus is alone — the sole survivor of not only his race, but his universe — and has to battle superheroes because, in order to survive, he needs to feed on the life force of planets (perfectly understandable and justified to the star titan, not so much to the inhabitants of Earth and other worlds). Thanos just wants Death to love him, and is rejected. Thus Stan's legacy of crafting characters with recognizable challenges and flaws is clearly present not just in his own creations, but in those of other Marvel writers and artists. And, beyond the empathy factor, it's this attempt to create three-dimensional characters that made Stan and Marvel's heroes — and villains — more interesting than their counterparts (at least until DC — and other publishers — started to catch on and flush-out their own characters' lives — internal and external).

Beyond the comics, cartoons and conventions, Stan was also a highly recognizable figure thanks to his media interviews and cameos in everything from Kevin Smith's Mallrats, to The Big Bang Theory, to the various Sony Marvel-related and official Marvel Universe movies. The overall impression was of a friendly, if occasionally curmudgeonly old guy. The loveable grandpa of comics. How true-to-life that was is up to those who knew him to say. But to the rest of us, it was the perfect representation of that person we'd always imagined was cobbling together the comics we loved.

Thanks for everything, Stan.

Posted by Robin Shantz at 4:54 PM No comments:

Author, editor and kung-fu mathematician James Alan Gardner joins us in the latest episode of the podcast! Jim starts off by talking about how comics were his first speculative fictional love, especially Marvel's The Avengers and DC's Crisis on Earth One! and Crisis on Earth Two!, leading eventually to science fiction like Heinlein's juveniles, and later, in university, to fantasy by Tolkien and Stephen R Donaldson, and horror by Stephen King.

We talk about his decision to study Math at university, and how a student work internship in Toronto with nothing to do at night gave him the opportunity to start developing his abilities as a writer. Jim tells us about how a writing workshop in Banff allowed him to further hone his skills and find his own voice, and we later discuss how this differed from his experience at Clarion. We also talk about Jim's early work writing science fictional stage plays and radio plays, like Curio (a paranormal investigative series predating The X-Files) and Percy Pulsar, Space Accountant. And he discusses his first prose science fiction stories that were published.

Coming back to superheroes, we talk about Jim's novel All Those Explosions Were Someone Else's Fault — a story pitting metahumans against vampires, werewolves and other paranormal monsters. And he teases its upcoming sequel, They Promised Me the Gun Wasn't Loaded, and the two other novels he's working on in the series. Jim also gives some hints about a haunted house novel he's developing.

Find out more about James Alan Gardner and his stories on his website:
https://jamesalangardner.wordpress.com


Let the Invasion begin!
Posted by Robin Shantz at 8:36 PM No comments:

This year's crop of jack o'lanterns at the Lair of bloginhood: 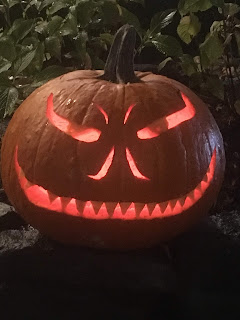 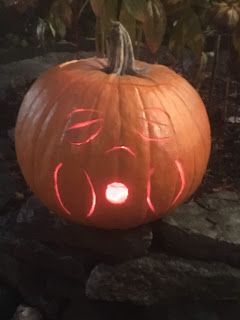 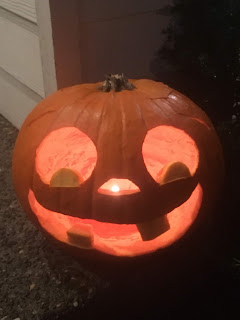 Posted by Robin Shantz at 6:44 PM No comments: