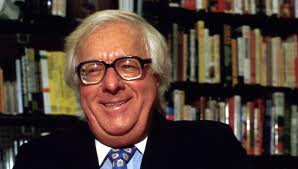 Somewhere, the residents of a graveyard, followed by dinosaurs, and led by Stanley Laurel and Oliver Hardy atop a white whale, are staging a parade: off to a small Illinois town to join a tattooed man and a gang of kids and vampires in a dance around a pumpkin tree before boarding a rocket full of books to Mars. They're celebrating the life of a truly great author.

This morning I woke up and checked Facebook as usual before hitting the news sites, and was hit with some sad news: author Kit Reed passing along the word from io9 that Ray Bradbury was dead.

Anyone who's had the misfortune of perusing this blog more than once knows I'm a Bradbury fan. Hell, my first post when I hopped up onto this soapbox was about him. The man, quite simply, as many have said in touching tributes today, was a genius.

For someone who spent so much time in libraries, Bradbury's style of writing was for the ear as much as the eye - his stories were made to be read aloud: conversational and thus accessible to anyone, and yet poetic in their rhythms and joyously overflowing with a celebration of all manner of words and ideas. He was a master of making his point bluntly while still hiding meanings in metaphor that had to be teased out by really paying attention to what he was saying. He could be unflinchingly hard in killing characters like those in "The City" or, most painful of all, "There Will Come Soft Rains," and yet he was also so very gentle and able to show the feeling and humanity in even the most frightening collection of monsters, like those in From the Dust Returned. And the breadth of his imagination was stunning, making the huge, profound and ancient or distantly futuristic sit chummily side-by-side with pop culture, distant worlds bedding down with the rush of LA or the deceptively comfortable quiet of Greentown.

Oddly - and appropriately - enough, when I've read or listened to or participated in fan discussions over the years of favourites from Bradbury's body of work, the image that comes to mind is of a library. Just like in a library, there's a lot of common ground: areas that everyone goes to now and then, like the periodicals, say, which, in terms of his stories, most fans would agree are near the top - stories like the afore-mentioned "There Will Come Soft Rains." But then, especially if people are allowed to name more than one favourite, you start to find that everyone has their favourite section, quiet corner, back stack of his work that others may have glossed over for whatever reason or never read at all. Read through enough of his stuff, and you'll find stories that appeal to people of significantly different tastes. And yet, just as there are people like Bradbury himself who enjoy browsing in almost any part of a library, there are also those who enjoy pretty much everything he's written.

Though my wife and I generally have different taste in books, we both enjoy Bradbury. She'd heard me gushing about him a few years ago, seen the animated masterwork The Halloween Tree (with the author himself doing a marvelous job as narrator, with his wise-old-Mr-Owl voice), and decided to see for herself what the fuss was about. She randomly chose One More for the Road off of the shelf and fell in love with "Tete-a-Tete." It's now her favourite story.

For me, over the years, "Last Rites" - his highly original and heartwarming take on the time machine trope - has grown to become my favourite among his short stories. As tough as it is to read, "There Will Come Soft Rains" comes in a close second. Among his novels, the closest to my heart will always be The Halloween Tree, with its celebration of autumn and All Hallows Eve and youth and the wild, dangerous adventure of night and the unknown. From the Dust Returned comes in second, with its deeply sad chapter "Homecoming". And, of course, The Martian Chronicles rounds out the top three. What about Fahrenheit 451 you ask? Well, of course I like it, but it's not quite a favourite.

While it's sad that one of the most relentlessly creative and entertaining of the old gods of SF has left us,  I take comfort in the fact that he's left behind such an enormous body of work that even once all of his stories have been read, it's possible to go back and read them again and have them still feel fresh. He's also influenced many other creative folk, including author Neil Gaiman, film maker Guillermo Del Toro, and delightfully raunchy filk-ish singer Rachel Bloom, meaning echoes of the old master will always be around. Besides, with all his stories about ghosts, vampires and various other unquiet dead, you have to think that if there was ever an author who was inclined to come back for a visit, Bradbury might be the one to pull it off.

But for the time being, rest easy, sir. You will be missed.