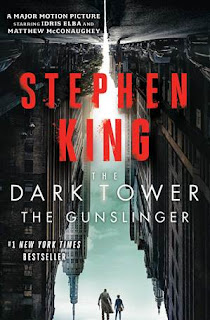 The Dark Tower, starring Idris Elba and Matthew McConaughey, is set to hit the silver screen in just a few days.

Stephen King fans will no doubt be paying close attention to how well the movie honours the series of books that inspired it.

To celebrate the film's upcoming release, Simon & Schuster Canada is giving away two copies of the first novel in the series, The Gunslinger!

The best part is you don't have to be a gunslinger or set out on a perilous quest to get one — just email me at:

Include "Dark Tower giveaway" in the subject line, and your mailing address in the body of the text.

On Tuesday, August 8, I'll pick two winners from among everyone who's emailed in, and make the announcement here on bloginhood.com

Posted by Robin Shantz at 4:09 PM No comments:

In this episode, we're joined by author and editor Silvia Moreno-Garcia. She tells us how HP Lovecraft and Peter S Beagle were among the English language authors who made an early impression on her. Silvia then goes on to discuss what it was like coming back to Lovecraft while doing thesis work, analyzing the attitudes towards race and sex in his stories, and how some of her own works have responded to him. She also shares the importance of Silvina Ocampo, one of the few female authors writing magic realism in Spanish during the 1950s.

We also talk about Silvia's experience with overlapping cultures — growing up in Mexico while also being exposed to American culture, then moving to Canada — and how this has influenced her writing, as demonstrated in her luchador superhero short story "Iron Justice versus the Fiends of Evil" (from the Masked Mosaic anthology). This leads us into a discussion about the phenomenon of Latin American speculative fiction authors getting recognition in their home countries only after moving overseas and writing in English. And she tells us what needs to happen for Latin American countries and Spain need to build their own strong, local speculative fiction communities.

Silvia also teases her upcoming novel, The Beautiful Ones (set for release in October, 2017).

Find out more about Silvia Moreno-Garcia on her website:
silviamoreno-garcia.com/blog/


Let the invasion begin!
Posted by Robin Shantz at 10:42 PM No comments: