Author, editor and professor Nalo Hopkinson joins us for our first episode of 2019. Nalo talks about her first loves in speculative fiction, including Harlan Ellison's "Shattered Like a Glass Goblin", Michael Crichton's The Andromeda Strain, and Kurt Vonnegut's "Welcome to the Monkey House". And she shares what it was like having the freedom to read what she wanted when she was growing up, with her library technician mother loaning Nalo her library card and letting her explore the stacks at work; and her mother and actor/poet/playwright/high school English teacher father letting her choose from their collection of books at home. We also talk about an early reading experience that didn't work out so well: her encounter with an Alfred Hitchcock anthology. And she tells us how her desire to become a writer was first sparked by a collection of Clarion short stories.

Our conversation then turns to the subject of diversity, with Nalo reflecting on Caribbean voices in the stories she encountered growing up. She talks about representation in speculative fiction, and the importance of seeing herself (or the effect of the absence of people like her) in the sf she was reading. She then discusses how this affected her own writing and her choices of how she populates her stories.

Next, we talk about Nalo's experiences working with publishers and artists to get the look of her book covers — and specifically the characters on them — right. She then goes into detail about what this has been like recently in her role as a writer contributing to the expansion of Neil Gaiman's Sandman universe at DC-Vertigo Comics. This leads to an examination of what it's like to step into a world created by another author and to make parts of it her own.

From there we move back to a discussion of what it was like to move from the Caribbean to the US and Canada, and how that shaped Nalo's writing. Here, she also reflects on her time working at Bakka-Phoenix Books, Toronto's sf specialty bookstore. Nalo talks about meeting sf legend Judith Merril during her time in Toronto as well. We also discuss what it's like in her current role teaching sf writing at the University of California Riverside.

Our discussion wraps up with a look at what Nalo's working on for 2019, including more House of Whispers stories for the Sandman comics, and her new novel that's in progress, Blackheart Man.
Our interview took place in October 2018 at the Surrey International Writers' Conference.

You can learn more about Nalo Hopkinson and her stories on her website:
https://nalohopkinson.com/index.html

Posted by Robin Shantz at 9:25 PM No comments:

I was reading a story earlier today in the Richmond News (thanks to Thor Diakow for passing it along) about how the producers of Game of Thrones are celebrating the coming final season of the show by trying to drown fans in a new wave of merchandizing (cue Yogurt from Spaceballs: "Merchandizing, merchandizing, merchandizing! Where the REAL money from the movie is made!") with the release of a GOT-themed line of whiskies. Apparently the BC Liquor Distribution Branch will be carrying the line (Or is the correct term "flight"? Flight of whiskies for a flight of dragons [yes, I just did that] — but Daenerys' pair doesn't really constitute a flight, does it?) in a couple of its stores. The Westerosi noble houses that have been included (along with the Night's Watch) are represented by different whisky brands (Talisker is doing the Greyjoy bottle, Oban's taking the Night's Watch, etc). 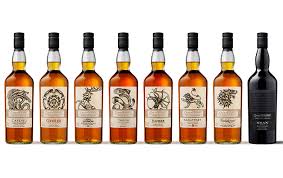 Personally, I think this was a bit of a missed opportunity: BCLDB should have held a launch event for this hooch in partnership with White Dwarf Science Fiction Books in Vancouver, with the government offering a tasting and selling bottles on one side of the room, and the bookstore selling copies of the A Song of Ice and Fire series along with George RR Martin's other, related books from that world.

As much as I'm a fan of the books and TV series, I'm not sure that I'll be buying the booze (then again...). But it got me thinking along silly lines (without the aid of any other brand of Scotch), and I started reworking the house words (using their original mottos as inspiration) of the big players of the Seven Kingdoms (along with the Black Brothers) to reflect their new alcohol affiliation... and the inebriation that will surely follow. I only wish that I was an artist, so I could retool the house banners to also reflect their new whisky-soaked reality. Anyway, pour yourself a dram or two (or three, or four — I'm not judging) of your favourite brand of water of life, and prepare to say the new house words:

Greyjoy: "We Do Not Slurp"

Arryn: "As High as Single Malt Can Make Me"

Baratheon: "Ours Is the Furry Tongue of the Hangover the Morning After"

Lannister: "Hear Me Ralph"
*or: "A Lannister Always Pays His Bar Tab"

Targaryen: "Fire and Blood — with Notes of Honey, Tangerine, Peat, Pine and Chocolate"

The Night's Watch: "And Now My Bottle Has Ended"


So what other great — or minor — houses of Westeros need their their own whisky words? What should they be?

Posted by Robin Shantz at 4:59 PM No comments:

Labels: A Song of Ice and Fire, dragons, Game of Thrones, scotch, whisky 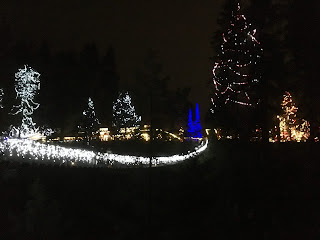 A belated Happy New Year, everyone! I hope all of you had an enjoyable holiday season, and, if you don't celebrate anything, that you were able to relax and enjoy yourself in the manner of your choice for a few days.

One of the things I did over the holiday season was to (finally!) go the Capilano Suspension Bridge park in North Vancouver on New Year's Eve to see their holiday light display. I haven't been up to the bridge in more than 30 years, and when I heard they were stringing the whole place with lights — including their treetop walk on the far side of the gorge — a few years ago, I wanted to go. Couldn't do it previously since my ex is afraid of heights, and most especially of suspension bridges. But since I'm a bachelor once again, I figured I'd pay a long-overdue visit.

And it was definitely worth it! The whole park is a galaxy of colours glowing in the dark, from the road-side entrance, to the swaying suspension bridge across the gorge, to the trails on the far side, the cliff-face walkway, and the network of smaller suspension bridges and platforms of the treetop walk 50 feet up or more among some of the bigger trees.

In fact, it was the treetop walk that I enjoyed the most, especially as a nerd. The infamous Star Wars Holiday Special may have predated the addition of the Ewoks to the saga, but if they had been around  to celebrate Life Day, they might have decorated their village like the catwalks above the Capilano park. Or maybe the elves of Lothlorien in The Lord of the Rings, if they'd wanted to make their treetop kingdom a little more colourful. Here are some pictures I snapped on my phone: 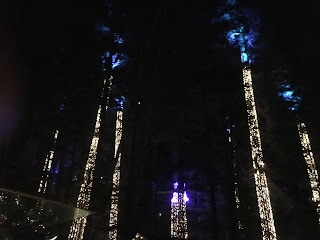 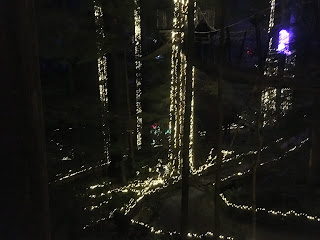 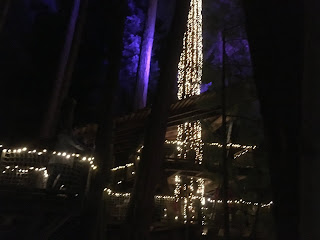 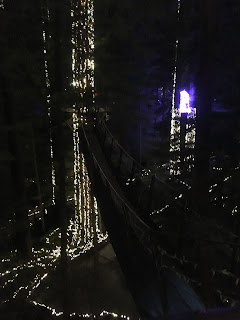 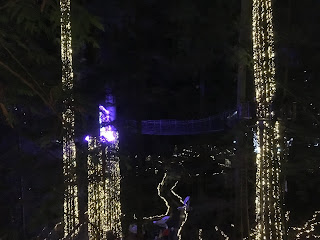 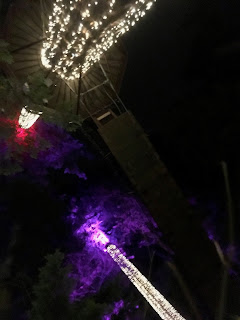 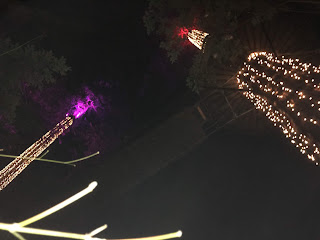 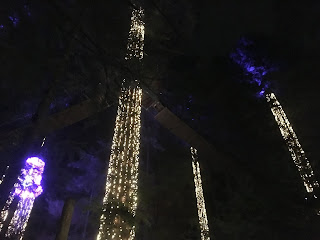 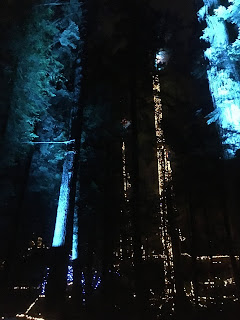 And just to round things out, here are a few other shots from around the park:

Posted by Robin Shantz at 8:49 PM No comments: