On Spec Magazine Managing Editor and Sunburst Award Board of Directors Chairperson Diane Walton joins us for this episode. She talks about her first love in science fiction, Andre Norton's novel The Stars Are Ours!, and reading everything in the genre she could get her hands on, including the works of Clifford Simak and James Blish.

Diane also shares the story of how an Alberta writers' group gave rise to On Spec Magazine (one of Canada's major speculative fiction magazines), and how she eventually ended up in the Editor's chair. She tells us about the challenges of finding funding for the publication, navigating a publishing universe where print and electronic versions of the magazine are available, what this means in terms of garnering a global readership, what it's like running the operation off the side of her desk, and the kinds of stories that get her excited.

And we learn about how the Sunburst Award (Canada's juried award for literature of the fantastic) ignited. Diane talks about what's involved in running the award, and why Canada even needs two awards for speculative fiction. Lastly, she reflects on how Canada's sf&f scene has changed over the years.

Our conversation took place in the impromptu bloginhood studio in the Dublin convention centre at the 2019 Worldcon last summer.

Find out more about On Spec Magazine on its website:
https://onspecmag.wpcomstaging.com

And you can discover which novels and short stories have won the Sunburst Award on its page:
http://sunburstaward.org

Posted by Robin Shantz at 9:32 PM No comments:

Another of the giants has passed. The new year has started with a sad note for the science fiction community: a few days ago, Laura Resnick announced her father, legendary author Mike Resnick, died after a battle with cancer (and the family is still raising money through GoFundMe to pay for medical expenses, so consider following this link and helping out).

Resnick was one of those voices in the genre that was around as long as I can recall. I can't remember my first encounter with his work, but it might have been his short story "Balance" in the 1989 anthology Foundation's Friends — Stories in Honor of Isaac Asimov, edited by Martin H Greenberg. I enjoyed his Old West science fiction novel The Doctor and the Kid, about Doc Holliday, but my favourite was Resnick's contribution to George RR Martin and Gardner Dozois' Old Mars anthology, "In the Tombs of the Martian Kings".

But to really do him justice, we need to hear from a serious fan of Resnick's work. That's why I've brought in my friend Geordie Howe (a guest on one of the first Invaders From Planet 3 "Voice of the Fans" episodes, and the bloginhood.com stringer photographer) to write the following editorial on what Mike Resnick meant to him: 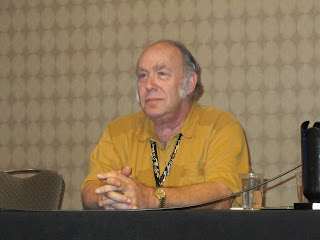 Mike Resnick, who, at his zenith, was one of the most popular figures in the science fiction fan and pro community, died January 9. He was nominated for the Hugo Award 37 times, winning 5, and 11 Nebula nominations, with 1 win. He was a Guest of Honor at Chicon 7 in 2012.

His daughter, Laura Resnick, announced his passing in an update to the GoFundMe created for his medical expenses.

For me, he was one of my favourite SF authors. He was a writer, editor, anthologist, and always a fan.

I first remember encountering his writing in his series on the space brothel, the Velvet Comet, including Eros Ascending (1984), Eros At Zenith (1984), Eros Descending (1985) and Eros At Nadir (1986), some of which were first published by the small press, Phantasia Press.

I came to his non-fiction writings as a subscriber to the SF fanzine, Lan’s Lantern, where Mike’s travel stories were always a highlight.

Then there was his Lucifer Jones series, those about Santiago, his award-winning Kirinyaga series, the Widowmaker series, several other series, and a long list of novels, including Ivory (1988) — a spin on Richard F. Burton — and many others.

Then there was his non-fiction. Again, many, many books, but particular to me are Stalking the Wild Resnick (1991), Unauthorized Autobiographies (1981), Through Darkest Resnick with Gun and Camera (1990), Once a Fan…(2002), …Always a Fan (2009), Resnick Abroad (2012), Resnick on the Loose (2012) and The Business of Science Fiction with Barry N. Malzberg (some of their writing created a bit of sf controversy – but that seems to be standard in today’s social media).

He also edited dozens of anthologies, giving a boost to many, many new writers. There is a lot out there. Check out https://www.fantasticfiction.com/r/mike-resnick/ to see what I mean.

I have numerous stories about encountering Mike. Here are a few:

He was guest of honor at Chicon 7 in Chicago in 2012. My wife, Marianne, and I were there and having dinner in the hotel restaurant the night before the con started. Mike came into the restaurant and did not notice the step drop down to the eating area. I saw what was about to happen and as Mike stumbled, I managed to grab him and support him before he would have completely fallen down. We had a good laugh at that incident with him telling me that it would have been interesting for the con if he had broken something. Later in the con, he presented a slide show entitled “Resnick Family Photos” where he asked the audience to guess the people in the shots. I was getting quite a few when he told me jokingly that I couldn’t play anymore.

Then, in Kansas City in 2016, I was talking to Mike in one of the [Worldcon] convention corridors and Robert Silverberg came up to us to ask directions. Mike went to respond but Silverberg cut him off, stating he had no faith in Mike’s sense of direction and trusted me. However, as it turned out, neither of us knew where the room was that Silverberg needed to be in.

At one kaffeeklatsch at an LA Worldcon, I asked Mike how he managed to write so much. He replied that if you wrote one page a day (as way of example), in a year you’d have a novel. Just write a little each and every day.

Over the years I managed to get Mike to sign most, but not all, of my books by him and attended numerous readings. He had this wonderful old-school habit of reading from paper copies and when the reading was over would give these stories out to audience members. Proudly, I have two of those paper copies in my collection.

His presence (and his wife Carol) have been absent for the last few Worldcons (due to his health) and he was sadly missed. There was then always the potential that I’d meet up with him again at some sf con. Now that is not to be. He will be missed.

Posted by Robin Shantz at 11:42 PM No comments: