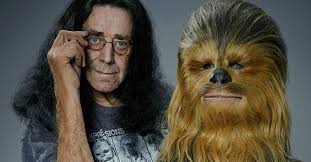 It was sad hearing of actor Peter Mayhew's death yesterday. The Star Wars saga formed an integral part of the core of my early science fiction and fantasy fandom, and the mighty Chewbacca was at the heart of that.

When he was dressed as the 200-year-old Wookiee, you couldn't see Mayhew's face, just that fanged, sasquatch visage. Nor did you hear his voice; only the mishmash of bear, dog, camel, or whatever collection of critter noises was dubbed in as the language of Kashyyyk. And yet Mayhew was still there. Under all that fur, he managed to project a tangible personality for his character. The stance showed it, and the speed at which Chewie would whip around to snarl when angry, and the frustrated waving of the arms, and the eyes.

Most of all, the eyes. Behind the mask, Mayhew wasn't just tuning out and striding through the scenes towards a paycheque, he was watching everything — Chewbacca was watching everything. Without a recognizable word or twitch of facial muscles, Mayhew's eyes told us everything about what was important to Chewie, and how the Wookiee felt. When the Stormtroopers get too close on the Death Star and the binders come off, we see Chewie's anger in those eyes. When Han is lowered into the carbon freezing chamber on Cloud City, we see the Wookie's sorrow and helplessness. And when Solo careens blindly into the cell beneath Jabba's palace, we can see how overjoyed his furry companion is. Under what Rian Johnson described as "a ton of yak hair", Mayhew showed he was a genuine actor.

Star Wars and all its sequels just wouldn't have been Star Wars without him.

May the Force be with you, Peter.

Posted by Robin Shantz at 11:14 PM No comments: