Finding a Dim, but Notable Star in the TV Christmas Special Sky: George and the Star 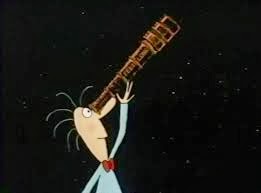 The other day when my wife and I were putting up our Christmas tree, we discovered the lights on the star weren't working anymore, sending us out on a hunt through three or four different stores to find the perfect star to replace it - or, at least a replacement that wasn't cheesy or too pricy.

Fitting, because the incident put me in mind of a scifi-ish TV holiday special about a search for a tree-topper that I really enjoyed as a kid back in the 80's: George and the Star (alternatively known as George and the Christmas Star).

This Canadian production didn't air that often (I can only remember seeing it once), then pretty much disappeared forever, so you probably won't see it in many lists of the greatest holiday specials of all time. But, for the few of us who did catch it, it made an impression. 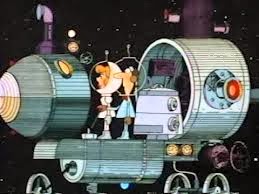 The story is about a guy named George (obviously), who lives alone with his cat in a big house. One night, as he's decorating his Christmas tree, George decides he needs a new star for it (no, his old one wasn't broken like mine, it was a paper cutout and our understated hero just wanted something a little more flashy). He goes outside with his telescope, spots a little star glowing in the depths of the night sky, and decides he has to have it for his tree. Using a collection of odds and ends from his house, he builds a starship and heads off on his quest. Along the way, he befriends a robot named Ralph, an astronaut named Barbara, and runs into a troupe of robotic Mounties - er, space rangers (wearing Stetsons, blue serge instead of red, and cruising around in a giant horse-like spaceship). He also runs afoul of space pirates, and, if that wasn't enough, space bikers, before eventually finding his star. And let's not forget the cookie-cutter inspirational songs from Paul Anka.

Over the years, I've looked for it on the off chance that it might have come out on videotape or DVD, but no such luck - or, at least, I didn't have the luck to come across it when it was released. Finally though, I managed to track it down on Youtube, where someone out on the 'net has shown the Christmas spirit and put it up to share with everyone.

So grab your star-salvaging permit, and reserve a bed on the motel moon, it's time to watch George and the Christmas Star.


Posted by Robin Shantz at 7:30 PM No comments: