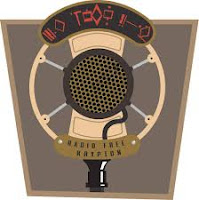 Posted by Robin Shantz at 4:19 PM No comments:

Thanks to Everyone Who Joined the Invasion at Worldcon

It’s been a couple of weeks since Dublin’s Worldcon wrapped, and I’ve been too busy to post final thoughts about the experience (hell, I was too busy at the time to post my usual day-by-day, blow-by-blow con logs!) but I wanted to post a quick thank-you to everyone who came to join the Invasion!

Attending Worldcon has always been a good opportunity to interview people for the Invaders From Planet 3 podcast. These can be long conversations focusing on one individual, or shorter chats for the “Voice of the Fans” episodes. And these “Voice of the Fans” installments have been an important part of every season right from the start. Because one of the things that makes the science fiction and fantasy (and comic, and video game, and anime, and tabletop game, and every other corner of the nerdiverse) community great is that whether a person is a professional, an up-and-comer, or someone who just enjoys the genre, we’re all fans, and we can all come to cons and talk with each other on an equal basis. To that end, all of our stories are important. And so I’ve wanted to capture as many voices as possible. And that’s where “Voice of the Fans” comes in: this is the chance for me to meet other fans from all kinds of backgrounds and invite them to share their stories about how they got turned on to the genre, and why they love it so much.

Several weeks before the geeky world descended on Dublin, I put the word out on Worldcon’s Facebook group inviting people to get together one day to join the Invasion and record an episode. And the response was phenomenal! Right away, members of the sf&f community from around the world who were coming to Dublin started expressing interest. So many, in fact, that I started to think that maybe one day wouldn’t do it. I started to wonder if I should spread the interview times out over a couple of days — after all, everyone would have different schedules of panels and activities they wanted to attend, and some folks were scheduled to be on some of those panels, and if the goal is to try to give members of the community a voice, then it’s only fair to create a few opportunities for them to speak.

By the time the convention arrived, I’d decided to have recording times on three days. And once things actually got rolling, that turned into four! At one point, I was telling a friend about this, and they asked me if it wasn’t too much work on my part — if all the recording sessions were going to take up so much time that they’d get in the way of me enjoying the con. I responded that it was exactly the opposite: that all of these conversations were going to be what made the con great! Listening to panel discussions, wandering through art displays, attending activities, and having the dealers’ room denizens pillage one’s bank account are always fun, but to my mind, it’s always been the conversations with other fans (whether they’re friends you’re reuniting with, or strangers met just once in passing) that make a con great. For me, all of these interview sessions would amount to a con within a con!

And the interviews were great! Writers (both veterans and up-and-comers), academics, performers, and people who just enjoy sf&f, from around the world and from all kinds of different backgrounds,  came out every day to share their stories. In fact, they all get bonus points for being able to find my impromptu recording studio in the first place! The challenge at any con is finding a (relatively) quiet corner, and thirst time around the lair of bloginhood was hidden behind a huge dividing wall at the back of the atrium up on Level 4. Funnily enough, I had a couple of people tell me that once I’d given directions to the spot, they’d scouted it out ahead of time and liked it so much they’d used it themselves occasionally as a quiet retreat during the con. At any rate, we had a lot of fun and everyone offered different perspectives. I could not have asked for a better series of conversations, and I’ll bet listeners will enjoy them almost as much as I did. And with such a bounty of stories, this season we’ll be able to feature at least two “Voice of the Fans” episodes — maybe more!

So, once again, a very big THANK YOU to everyone who came out to join the Invasion last month in Dublin! And for all the other Invaders out there who listen to the show, stay tuned: Invaders From Planet 3 will be returning for another season this fall!

Posted by Robin Shantz at 12:32 PM No comments: