Stephen Furst Passes Beyond the Rim 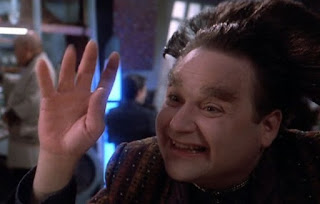 Some sad news out of Hollywood this weekend: actor Stephen Furst has died at age 63.

My first memory of him onscreen was when I was a kid watching rented movies on VHS that I was probably too young to be watching, and Furst, playing Kent "Flounder" Dorfman, came rolling happily down the sidewalk at Faber College in Animal House, looking for a fraternity where he'd be accepted.

When you think of Animal House, mostly it's the larger-than-life characters like Bluto or Boon or Otter who push their way to forefront of your memory, but without Flounder and his buddy, Pinto, the movie doesn't happen. They're our window into the staggeringly drunken world of Delta house, and our avatars within it. And Furst gave a wonderful performance as Flounder. His reaction to the horse's heart attack is priceless. His deliciously innocent "Hello!" when the dean rattles-off his name in preparation for his dressing-down is perhaps the best moment of the scene where the boys are expelled. And while it's not the flashiest character wrap during the riot at the end of the movie (it would be hard to top Bluto's lecherous pirate diving from the rooftops to make off with the sorority girl, or DDay's war cry of "Ramming speed!" as the Deathmobile charges towards the grandstands), his ecstatic, cathartic jump for joy when Niedermeyer is bulldozed off by a runaway float is certainly the most satisfying moment of Animal House, and never fails to bring a smile to my face when I rewatch it.

Around the same time, I also enjoyed him on St Elsewhere, though my memories of the series are pretty fuzzy at this point.

But Stephen Furst's best role — by far — was as diplomatic assistant (later consul, still later conspirator and assassin, even still later ambassador, and much later emperor) Vir Cotto on the television masterpiece Babylon 5.

Amidst all the legendary captains, the ambassadors navigating conspiracies, the tough cops, dedicated doctors, armies of light and soldiers of darkness, Vir was just a normal guy. He was a quiet, likeable, straightforward, intelligent, moral, chubby little guy working hard at an unappreciated (and often undignified) job; a minor member of a minor house on Centauri Prime who just wanted a stable career and (somewhat unusually for his people) a wife who he could love and who might hopefully love him back. While all of the larger characters in the series were well-rounded and believable, it was Vir's ordinariness that made him most identifiable for the audience (at least, as identifiable as an alien character with some truly funky hair can really be).

And Furst played him perfectly. Absolutely, credit is due to Straczynski and the other writers who created him, and to the series directors (and Furst was one of them, from time to time), but Furst was the one who brought Vir to life and made him believable. In so doing, he made Vir stand out as vitally important to the show's overall story.

There are so many Vir moments that are memorable, but in my opinion, these five are the most significant:

"In the Shadow of Z'ha'dum" season 2, episode 16: Naturally we have to mention Vir's famous response to Mr Morden's question "What do you want?" Sure, Sheridan may have blown Morden up (mostly), and Londo had him tortured and beheaded, but Vir — the little guy with no real power — stood his moral ground when confronted with a clearly powerful and dangerous opponent, and with his "... some favours come with too high a price..." response told the Shadow agent that he saw right through his game, he wanted his head on a pike, and showed him exactly how he'd wave at that head when the time came. There are so many ways that scene could have been played wrong, but Furst danced through it perfectly.

"The Long Night" season 4, episode 5: Vir may be remembered in this episode for killing the mad emperor, Cartagia, but Furst's performance really stands out later when the attache/conspirator/assassin, drunk on liquor but in truth hammered by guilt, pours out his emotional agony over the murder to Londo. Sure, Cartagia deserved to die, and it was necessary to save the Centauri people, but it was a killing none-the-less — moreover, Vir's first killing —and Vir would have to live with it. In a series where killing, whether in battle or by murder, is almost a daily occurrence, Furst's believable portrayal of Vir's struggle shows us the truth that there's usually a high emotional price for taking a life.

"Sleeping in Light" season 5, episode 22: In a smaller, quieter moment in this quiet goodnight to the series, Vir tells the story of how he and Londo once heard the Pak'Mara singing. Furst delivers it with just the right amount of wonder and wistfulness that in many ways captures the heart of Babylon 5.

"Comes the Inquisitor" season 2, episode 21: One of the most powerful moments of the entire series: Vir, riding alone in an elevator with G'Kar, attempts to apologize for the wholesale slaughter of Narns during the Centauri bombing of Narn. G'Kar rounds on Vir, slashes his own hand with a knife, and for every drop of blood pronounces "Dead.", then asks the Centauri attache how he can apologize to the dead Narns. When Vir says he can't, G'Kar flatly decrees that he can then never forgive. The blood dripping litany of death stretches uncomfortably long, and part of what makes it uncomfortable is Furst's masterful look of pure shock, horror, and defeat.

"Sic Transit Vir" season 3, episode 12: For all of these moments of drama, we can't forget that Vir was frequently a character of comic relief in the series. And so, because Stephen Furst's family has indicated in their announcement of his passing that the actor would want to be remembered for making people laugh, it's most appropriate to end on a funny note. In this episode, Vir, having just discovered he's engaged to be married, and having no idea what to do with his all-too-eager fiance who's just arrived on the station, goes to Ivanova for advice on how to please a woman in bed. It's the single funniest moment in the entirety of Babylon 5 and its sequels, and one of the funniest moments of any science fiction TV series. I give you "we have six":

Posted by Robin Shantz at 2:32 AM No comments: