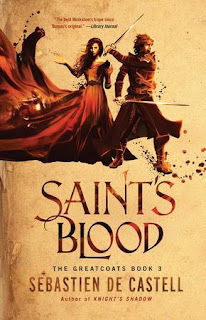 If you're in the Vancouver area and looking for something interesting to do Thursday night, swing by White Dwarf Books for the launch and signing event for Sebastien De Castell's newest book, Saint's Blood.


I've enjoyed the heck out of the previous two novels his Greatcoats series (Traitor's Blade and Knight's Shadow), so I'm looking forward to this one. They're fun, rollicking, Three Musketeers-inspired stories set in a fantasy world where the Greatcoats — the former wandering police/judiciary force of a now-overthrown and murdered king — try to reunite their realm under a just ruler, while dealing with squabbling, violent lords and their knights who enjoy the chaos just fine, thank you very much. Throw in encounters with "saints" (people of exceptional ability in their chosen pursuit — like swordplay — who possess near-godlike powers), assassins, the occasional monstrous horse, and sometimes the need to eat "the candy", and these heroes have their work cut out for them.

So buckle your swash and come on down to White Dwarf this Thursday evening!

Posted by Robin Shantz at 11:27 PM No comments:

Salvaged from the Signal: Thoughts on the BSG Episode "Maelstrom"

This is the final item I've salvaged from SF Signal (recently retired from the 'net with honour). Over the years, I submitted comments to many of the discussion threads beneath posts and Mind Melds on the site, but I think, on the balance, few were worth keeping. This is an exception.

One of the best TV shows in the last few years was the new Battlestar Galactica (though some would complain it went far enough off the rails in its last season to lose that status). It was a story that took a hard, unflinching look at the lives of people facing a hard situation: life as survivors on the run after an apocalypse/genocide. It also portrayed how they died. Sometimes those deaths were suicides.

One episode, "Maelstrom", depicted the apparent suicide of ace Viper pilot Kara "Starbuck" Thrace. After allusions to a rough life, she survived the Colonial apocalypse, followed by years of more-or-less non-stop daily battle defending the fleet against Cylon attacks, with the added weight of various personal conflicts in what passed for down-time. Unsurprisingly (to me, anyway), Kara bottoms-out. While flying a mission above a planet, she decides to fly her fighter into what appears to be a violent storm, giving the impression that she's ended her life. Ultimately (and remember, the show's been over for years, so don't go whining about spoilers), we find out in later episodes that Starbuck survives... or respawns/reboots, or whatever, but not knowing that would happen when "Maelstrom" aired, the character's apparent end hit audiences like a Cylon Centurion's metal fist to the jaw.

This was not the first portrayal of suicide on the show (Boomer attempted to end her life fairly early on), and it wouldn't be the last (Dee's tragic death was one of the most heartbreaking on the show), but when "Maelstrom" aired, it really hit a nerve with fans. At the time, one of the SF Signal contributors posted a piece about it (I'd share the link, but the page has been deactivated), and while there were some thoughtful comments afterwards, there were some people in the community who reacted fairly harshly. Reading these comments, I became a little alarmed at the lack of understanding and empathy in some of them and thought I had to weigh-in. See, over the years, I've had a number of friends who were suicidal. Some of them attempted. And in a few cases, I had to support them in their moments of crisis until they were in a safer frame of mind. So this hit close to home. Additionally, at the time I was working for the local crisis centre/distress line, so I knew a lot about the problems in our society around discussing suicide: about how much stigma there is around talking about it, about the need for empathy when talking about it, and about how many people have no idea of the complexities and difficulties that are involved when someone is considering suicide. And I knew that it was entirely possible that someone out there who was suicidal could have been reading that post and those comments, and that some of the harsh criticisms of Starbuck, and of Ron Moore and his writers for tackling the issue, might have had a harmful effect on them. Something needed to be said. So I gave it some thought, talked with a few people to get some more to think about, and then added my two cents to the discussion.

The entire discussion thread would have been way too long to copy, so I've just included my comment here (occasional late night-induced typos and spelling errors and all), for what it's worth:


I think Moore and his writers have put a lot of thought into the presentation of Starbuck's suicide. Putting aside speculations about her supposed "destiny", the writers have deliberately tackled the very human tragedy of suicide head-on with this episode as part of their efforts to create and develope realistic characters and a believable story line.

Starbuck's decision to kill herself came as no surprise. The story lines have been building her death by suicide as a real possibility since the beginning. Starbuck has displayed many signs of someone who is at risk of suicide including erratic behaviour and mood swings, increased use of alcohol, depression, sense of worthlessness (the "screwup"), agression, giving things away (the statue of Athena given to Adama shortly before her death), isolation from loved ones, and previous attempts (the dual with "Scar" was clearly more than just an enemy threat elimination or a competition with Kat to be the top gun). Let's not forget also that we've been told she has a history of childhood physical and emotional abuse (Leoben's cross examination in the interrogation room and the doctor Cylon's medical analysis on the Caprica "farm") which she constantly surpresses. And then there's the added stress of the annihilation of the Colonies and possible accompanying survivors' guilt, imprisonment and personal violation on the "farm", imprisonment and psychological torture on New Caprica, the loss of Apollo as a potential lover (during the conversation in the hanger where Lee says things with Dee are great, Kara looks like she's trying to hide the fact that she feels like she's been kicked in the gut), and of course, frequent, intense battle with the enemy. The manipulations of the apparent Leoben who appeared to her in the cockpit were just the last straw. The writers have been showing us a very fragile, much pained Kara Thrace for a long time.

Given this long history of building stressors, the pacing of the episode was entirely appropriate. Once Starbuck began moving in the direction of suicide, things proceeded very quickly. The pacing also puts the audience in the position of many of her friends who may not have seen the suicide coming, or who may not have suspected that she was hurting that much and who are thus all the more shocked at the apparent suddeness of the death.

As to comments to the effect that Starbuck's actions are "selfish and ignoble" or that she is a "quitter", while these are commonly-held opinions about suicide, it's important to understand that suicide is not about death, it's about finding a way out of pain. People who attempt or complete suicide are in so much emotional pain that they're desperate to rid themselves of it and they can't see any other way out. This is why most people who die by suicide send some kind of warning first - at some level they're looking for another option that they can't see. The problem is whether others understand the warning in time, whether they can get the person to help, or whether they see the warning at all. In Starbuck's case, Helo seemed to have some sense that she needed help (he suggests she see the psychiatrist he's taking Hera to) though he didn't see the imminence of the danger. When Kara gives the Athena statue to Adama, that's a warning too, Adama just doesn't see it, especially given Starbuck's quick shift from being downcast to buoyant. In this sense, Starbuck was trying, on some level, right up until she got in the cockpit, to get help. In real life, of those who die by suicide, some are people who we call heroes - police officers, members of the military, firefighters - people under increadible stress, usually on a daily basis. While we, as survivors, are upset when a person kills him/her self, it's important to remember that everyone, including our heroes, has different tolerances for stresses and different degrees of support to overcome those stresses. Moore and his writers have realized this, and in presenting Starbuck as someone in a highly stressful job who dies by suicide, they have created a painfully human character who has reached her limit, doesn't feel she can talk about it, and can't see another way out.

In the end, I think Moore and his writers are to be praised for tackling the issue of suicide in "Maelstrom". They presented Starbuck as a real human being struggling with, and ultimately overwhelmed by, real problems. In dealing with the subject, they have not glorified her death - the crew (even Tye, who's come to blows with Kara) are visibly shaken and grieving, and whatever this "destiny" alluded to is, the fact that it's pushed on Starbuck by Leoben in a time of emotional fragility should make us highly suspicious. We may ask, what is this supposed "destiny", but ultimately, does that make any difference to grieving shipmates who have just lost a friend? In dealing with suicide on BSG, Moore is helping to remove the stigma our culture has placed on its discussion. By talking about the causes and effects of suicide, we become more aware of the problem and are in a better position to stop it. We can reach out to others and offer to help them help themselves overcome these feelings. To that end, SF Signal is to be credited too for bringing this discussion into the open.

If anyone reading this thread is considering suicide, remember that you can get help to overcome these feelings; there are people out there who will listen to you and who will support you and help you explore other options. If you need help, call your local distress line/crisis centre, speak with your doctor, a counsellor or someone you can trust to help you get to safety. If you are a person who is worried a friend or relative may be suicidal, talk with them, ask them if they are thinking of killing themselves, listen to them without judging them, get them to help (such as a doctor or counsellor) who can help them overcome these feelings, do not leave them alone without making sure they have help, and you can also call a distress line/crisis centre for assistance.

Posted by Robin Shantz at 8:06 PM No comments: