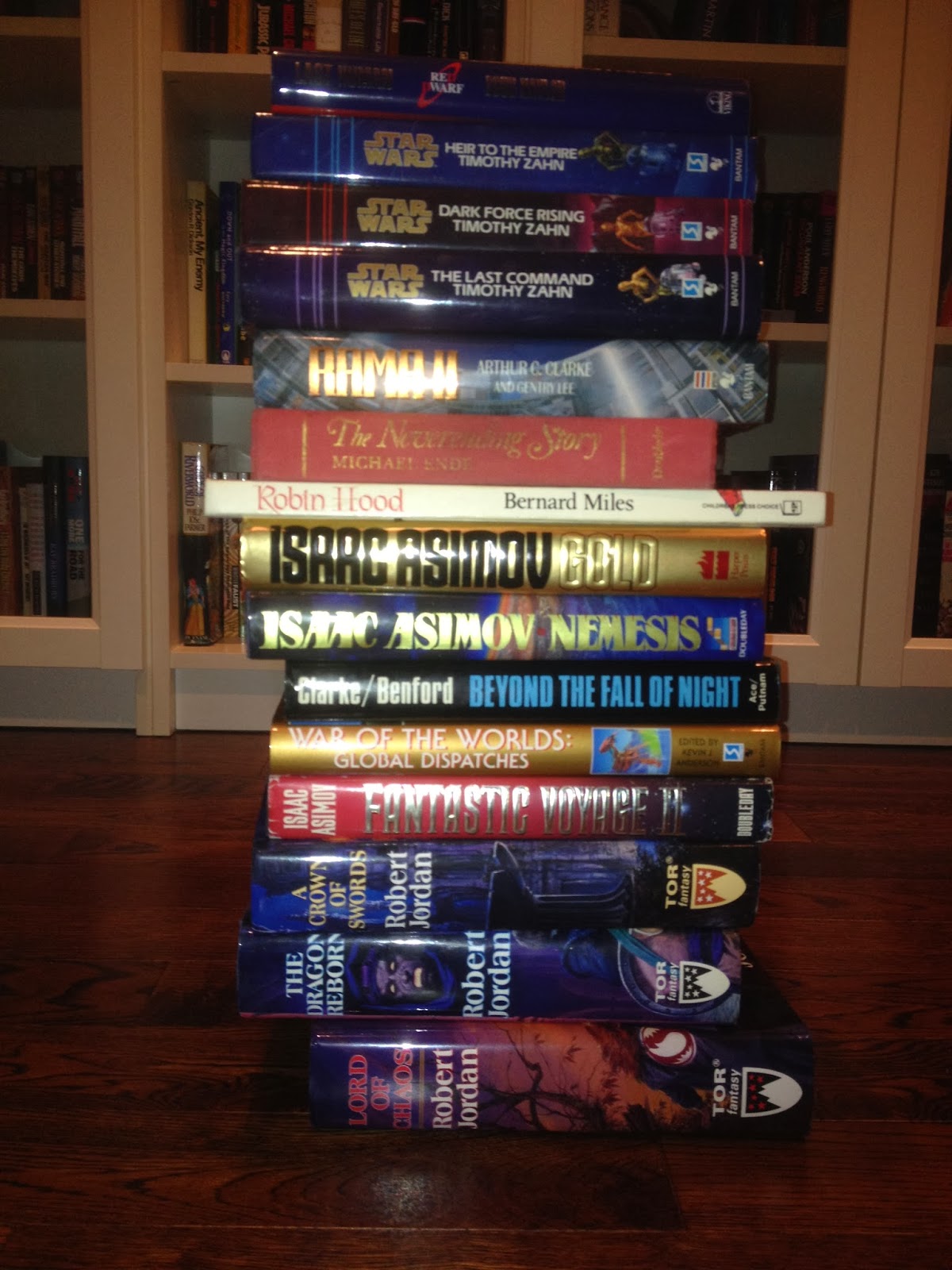 I hope you enjoyed the recent holiday season, whether you celebrated specific holidays or not.

For me, it was a great holiday season, especially for indulging my passion for speculative fiction. First: an early gift exchange with my wife (ahead of our trip back east to visit my folks), where she gave me a big stack of books, including new stuff from the likes of Claude Lalumiere and Peter Watts. Second: while prowling around in an antique store in the village of Almonte, Ontario, I found a first British edition (hardcover) of The Silmarillion. Third (and perhaps most important of all): I was finally reunited with the last stray remnants of my hoard.

If you're a book collector like I am, it's an old story you're probably familiar with: I began amassing my SF book and comic collection as a teen, but when it came time to leave for my second round of post-secondary studies in another province, I had to leave most of my babies behind. In the years that followed, I moved several times, following career opportunities; meanwhile, my parents moved as well, carrying the abandoned (Is "abandoned" even the right word? It seems far too negative and harsh a term for a decision that, while necessary, was so very reluctant.) portion of my collection even farther away. More time passed, and I continued to cultivate my book collection, but I always missed the ones that were still most of the way across the country with my folks. Every now and again, I'd go home for some holiday or other, or they'd come out for business or a visit, and I'd have a chance to recover a couple of the missing books (As many as I could stuff into my suitcase on the return trip if I was doing the travelling. Only one or two if it my folks agreed to play mule.), gladly welcoming them back into the fold.

But I always knew that there were still some missing. I just knew they were buried somewhere in the depths of my parents' basement, at risk of the old man tossing them into the donation pile if I didn't get them back soon. Always bugging me by their absence on my bookshelves - holes in the ranks of the titles, books missing singly or entire series not where they should be. What was worse, Dad - right up until this recent Christmas when I unearthed the evidence - always maintained that there were no books left, that he'd brought out all there were, and that there were no boxes left. But I knew he was wrong. One look at my shelves was proof of that. But more than that, it was that sense of the lack of completeness to the hoard, right down to exactly which items weren't there. It was like being Smaug in Tolkien's The Hobbit, when Bilbo steals a two-handled cup from the treasure pile. The dragon wakes up and instantly knows damn well knows that something's been taken from the collection. In fact, he knows exactly what's missing, and he's pretty pissed about it. Like that. Except, you know, I didn't fly around incinerating the outside of a mountain in my frustration. Not that I wouldn't have, mind you. It's just, you know, the absence of an ability to fly or breathe fire.

This Christmas though, was going to put an end to the years of longing for my missing treasures. This Christmas, we went to Ottawa to spend the holidays with my parents, and I was determined to stage a clandestine recovery of the last books that would have rivaled Indy's unearthing of the golden idol at the beginning of Raiders - if he hand't lost it to Belloq and the blowdart gang. After a lot of back-breaking shifting of boxes, I finally got to the bottom of the pile and found it [insert heavenly choir-sounding synth music and sfx-inserted golden glow] - the last box of books! Finally, I was reunited with Red Dwarf - Last Human, Timothy Zahn's Heir to the Empire books, missing installments from Jordan's Wheel of Time, a bunch of Asimov and Clarke books I hadn't seen in years, as well as a couple of favourites from my childhood. From there, it was a matter of finding room for the dozen or so hardcovers in our luggage (after the obligatory gloating to Dad about finding a stash he'd claimed didn't exist), packing and repacking each bag so they wouldn't be over the airline weight restrictions (because paying the overweight bag penalty fee would suck), and getting them home.

And I've gotta tell ya, it feels pretty good to finally have the hoard complete again. A Merry Christmas, indeed.

Posted by Robin Shantz at 9:34 PM No comments: