Sad news the other day of Leonard Nimoy's passing. A director, writer, photographer, and poet, Nimoy was best known as an actor (yes, I'm deliberately leaving out singer, because we shall not speak of the Bilbo Baggins song). But because of his iconic role in the Star Trek franchise, Nimoy was one of those people who had transcended mere actor status — his name became part of the science fiction community's vocabulary, so much so that it was tapped for the beginning of Monsters vs Aliens for the "Code Nimoy" alert.

Naturally, for as long as I can remember, I've associated him with his role as Spock. As a little kid, I'd see reruns of the original Star Trek on TV, and one of the things that stood out the most was Spock providing the steady anchor onscreen against Kirk's cartoonish flamboyancy. I wasn't paying attention  to the dialogue so much as the rhythm of the characters and how they navigated each story, and Spock always had his own tune. The words became more important when I came back to the series later as a teenager, and while I would tend to identify more often with other characters, Spock remained one of the ones I liked the most. He was thoughtful and smart, always did the right thing, and, because of his alien status, was always a little (or a lot) isolated from his companions. And yet, despite that rigorously logical personality and approach to life, Nimoy managed to add enough subtle touches to keep the character from being totally alien to the audience, and gave us something to like. But I think it was in the 'Trek movies of the 80s and early 90s where Nimoy most excelled in his performances, again, using his ability to add those subtleties to stand out from fellow cast members or story lines that were frequently not subtle, and to underscore just how much was going on inside Spock as he dealt with each crisis. 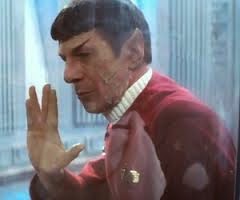 Best examples? Spock's death in Star Trek II — The Wrath of Khan, for starters. Where others might have been tempted to go all-out demonstrating Spock's agony after being toasted in the energizer chamber, Nimoy gave us just a taste of it — just enough to let the audience know that it was really, really bad, but still kept his performance very controlled, in keeping with the personality of a character who would have kept that pain tightly under wraps to avoid upsetting his friends, and to maintain his dignity. He shows us Spock fading inexorably, holding on long enough to say what he has to say, but all along acknowledging the inevitable and certainly not trying to prevent it. And it's because of Nimoy's presentation of gentle acceptance, a grace when all others around him have been clawing in ugly ferocity to keep living at all costs, that Spock's death wrecks the viewer so much.

Then there was the mind-meld scene with Kim Cattrall (and her horrible hair) in Star Trek VI — The Undiscovered Country. Here, Nimoy teases us with a deceptive amount of emotion: Spock is clearly angry at Valeris' betrayal, and coldly resolved to pry the information about the conspiracy out of her. And yet, for all of that, he's holding so much back because the character is holding so much back. As a Vulcan, Spock's emotions would have been explosive at that moment, but because Vulcans fight to keep their emotions in check, and Spock more than most, half the battle you see onscreen on Nimoy's face is the character's fight to keep himself under control. It makes the scene that much more frightening because as Spock forces the mind-meld and starts tearing away Valeris' mental defences and boring into her memory (and let's call a spade a spade here, what's clearly happening is a mental rape: Spock is forcing himself inside Valeris against her will), the viewer can see that Spock has reconciled himself with having to commit an atrocity against one of his proteges, an act of brutality that he will have to live with for the rest of his life (and one that won't be easy to live with, given his acceptance of the need to acknowledge some emotion, unlike other Vulcans), and who wouldn't be scared of someone who could do that — and, more importantly, do something that monstrous, reveal that ability within themselves, in front of their friends? The viewer can also see from Valeris' reaction that not only is she being painfully brutalized, but because the mind-meld allows her to fully experience Spock's consciousness, she is feeling the full force of his Vulcan rage behind his cracked facade of emotional control, and she is clearly terrified. Very few other actors could have done this without over- or under-acting. 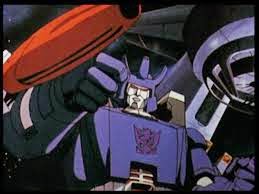 And if you want to look at the opposite end of the spectrum and talk about a character with an excess of emotion, there's always Nimoy's performance as Galvatron in the animated Transformers: The Movie. After a near-dead Megatron is rebooted and upgraded by the world-eating planet transformer Unicron, he becomes the new Decepticon leader, Galvatron. Problem is, coming back from the brink, or maybe a glitch in Unicron's upgrade job, has left Galvatron with some issues. Where Megatron was a short-tempered egomaniac who was into punishment, Galvatron's a flat-out nut who goes off with next to no provocation, and leaves punishment by the side of the road in favour of killing. Nimoy does an admirable job of voicing this character. And while Nimoy would, years later, go on to voice another Transformers baddie in the totally unnecessary ADD-fest known as Transformers — Dark of the Moon, it'll be his role as Galvatron in the animated flick that'll enshrine him in the franchise' lore. 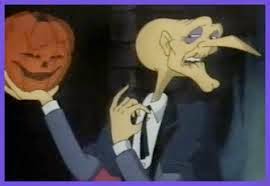 But for all his roles over the years, for all that Spock impressed me, the Nimoy performance that I resoundingly enjoy the most is that of Carapace Clavicle Moundshroud from the animated TV movie version of The Halloween Tree. Pinching and dragging his voice to sound like the creak of an old wooden coffin lid that's about to release a horror upon the world, Nimoy does a brilliant job of making Mr Moundshroud alternately cantankerous, amused, brusk, pedagogical, wistful, sly, surprised and curious, and even embarrassed in a reticent sort of way. He makes the viewer as wary of Moundshroud as the kids are, and yet draws you in as surely as the trick-or-treaters. As the one who does the most talking in the production — next to the story's author Ray Bradbury in his role as the narrator — Nimoy creates a voice that is the perfect evocation of a personification of the ancient, fun creepiness of Hallowe'en.

And maybe it's appropriate to end with The Hallowe'en Tree. As fans, while we celebrate Leonard Nimoy's life and performances, let us also say "Carry his pumpkin gently, Moundshroud. Gently."

Posted by Robin Shantz at 12:18 AM No comments: